I originally posted this blog article in 2010 which was the 200th anniversary of Oktoberfest, but as today is once again the start of Oktoberfest, I thought I’d take poetic license and reuse.  Also  since then, we have become Innkeepers and we try to bring a bit of “Gemütlichkeit” to all of our guests. Not sure what Gemütlichkeit is?  Read on to find out.  But first some more about Oktoberfest.

What exactly is Oktoberfest? To begin with, THE original, authentic Oktoberfest it is a 16 day celebration in Munich, Germany that occurs mostly in September and usually ends on the first Sunday in October. The initial purpose was to celebrate the marriage of Crown Prince Ludwig (who later became King Ludwig I) of Bavaria and actually did occur in October. The celebration was later moved to mid September in order to take advantage of the usually nicer weather in Germany at that time of the year and perhaps more importantly because most people are no longer farmers who need the valuable September weeks for harvesting their goods.

While many of us relate large quantities of beer with Oktoberfest, there are also many types of food associated with the festival. I admit I am a little biased to the culinary aspect for two main reasons. The first and obvious reason; I am a chef by profession and always enjoy trying new foods and then recreating the experience in the kitchen. The less obvious reason is that my wife, Margit grew up in Bavaria and always enjoys the tastes of home when I cook something from her childhood.

Besides the sausages, there is one staple food that stands out above the rest and that is the Bavarian Brezen or Pretzel.

If you have never had the pleasure of eating a true Bavarian Pretzel, it is difficult to appreciate the differences between what is sold here in the States as a Pretzel and what is served in Bavaria. I suppose you may compare it with the difference between a bagel bought on the Lower East Side on Manhattan to a Bagel purchased at a supermarket.

It was this Pretzel that I had searched for and attempted to recreate in the kitchen over the years with some decent facsimiles but all were lacking in the hard crunchy crust and soft inside associated with a true Brezen. My search was finally complete upon a trip to Germany last year with Margit. We had the opportunity to visit with Margit’s father and his wife Ursula. Ursula is about 90 years old and is sharp as a tack, we started talking about cooking and Pretzels and she gave me her recipe. I was excited to try it and couldn’t wait to get into the kitchen. (Note:  Since I originally posted this, Ursala has passed. May she rest in peace_

However, after my return home; my mood was dampened when I discovered that one of the key steps in preparing the pretzel prior to baking was dipping it in Lye. Yes, lye similar to what is in drain cleaner. Upon research I found that food grade lye is FDA approved and readily available over the Internet. Yes, I was able to continue my quest! If you are apprehensive about using lye in cooking (it is also used to make items such as hominy and the aforementioned bagel) you can substitute a baking soda bath prior to baking. The Brezen will not be quite the same, but almost. The recipe includes both options.

While these Brezen are delicious by the themselves or with some sweet mustard, to truly recreate the Oktoberfest Bier Garten experience try serving it with the traditional Bavarian cheese spread “Obatzda”. 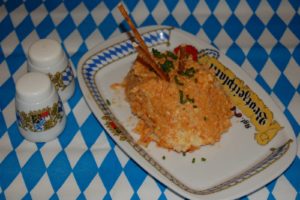 This dish is not for those counting calories or are on a low fat diet as the two main ingredients are cheese and butter. It is however a delicious accompaniment to Bier and Brezen. There as as many versions of Obatzder in Bavaria as there are for chili in Texas. They all contain the same basic ingredients but with different variations. Some also include beer as an essential ingredient. I am partial to my wife’s family recipe and have included it as well.
The Bavarians have the word “Gemütlichkeit” that literally translates to coziness. However that is doing the word an injustice. The word has a much more abstract meaning. It actually is meant to convey a feeling of friendship, family and belonging. This is the feeling that one should have during Oktoberfest. So if you are enjoying a late summer day with friends and are having some Bier, Brezen and Obatzder then “Ein Prosit der Gemütlichkeit” or “a toast to good cheer”
Brezen

23 oz Bread Flour
4 oz Warm Milk approximately 110 deg
4 oz Warm Water approximately 110 deg
3 oz Unsalted Butter (Room Temperature)
1 pack Instant Yeast
1 Tbs Salt Coarse (Kosher) Salt for sprinkling
Mix Yeast and Water
Add Butter, Salt and Milk to Flour
Add Water Mixture to Flour
Mix Flour mixture either by hand or in a stand mixture with dough hook until dough is formed. Approximately 10 minutes in mixer or until dough is elastic to touch.
Let dough stand for about one hour or until doubled.
Degas (punch down) Dough and cut into 12 pieces for large pretzels or 18 pieces for smaller Pretzels.
Roll out individual pieces into strands and twist to form pretzels.
Dip Pretzels into either Lye or Baking Soda Dip
Sprinkle with coarse salt

Caution: If using Lye, you should wear goggles and gloves. Wash all surfaces after use and rinse any skin area that comes in contact with solution. Be sure to add the lye to the water as adding the water to the lye may cause a chemical reaction. DO NOT BOIL WATER

Drop two pretzels at a time in dip and remove with tongs. Avoid touching lye solution with hands,

Boil Water and Baking Soda, Drop 2 pretzels at a time into water mixture and remove with slotted spoon. Place on paper towels to drain

Cut Camembert cheese into small cubes
Cut Butter into cubes
Mix Butter and Cheese together. Using a fork, be sure to break larger pieces down until all is blended
Fold in Onions, mix well
Mix in paprika
Add Salt and Pepper to taste

Cover and refrigerate for at least 30 minutes up to overnight. Garnish with chopped chives and pretzel sticks. Serve with Bavarian Pretzels or rye bread